COVID-19 Notice: Metropolitan College offices are operating on regular business hours and providing all services via remote delivery. If you would like to receive in-person services, learn more about our office hours and social distancing guidelines. 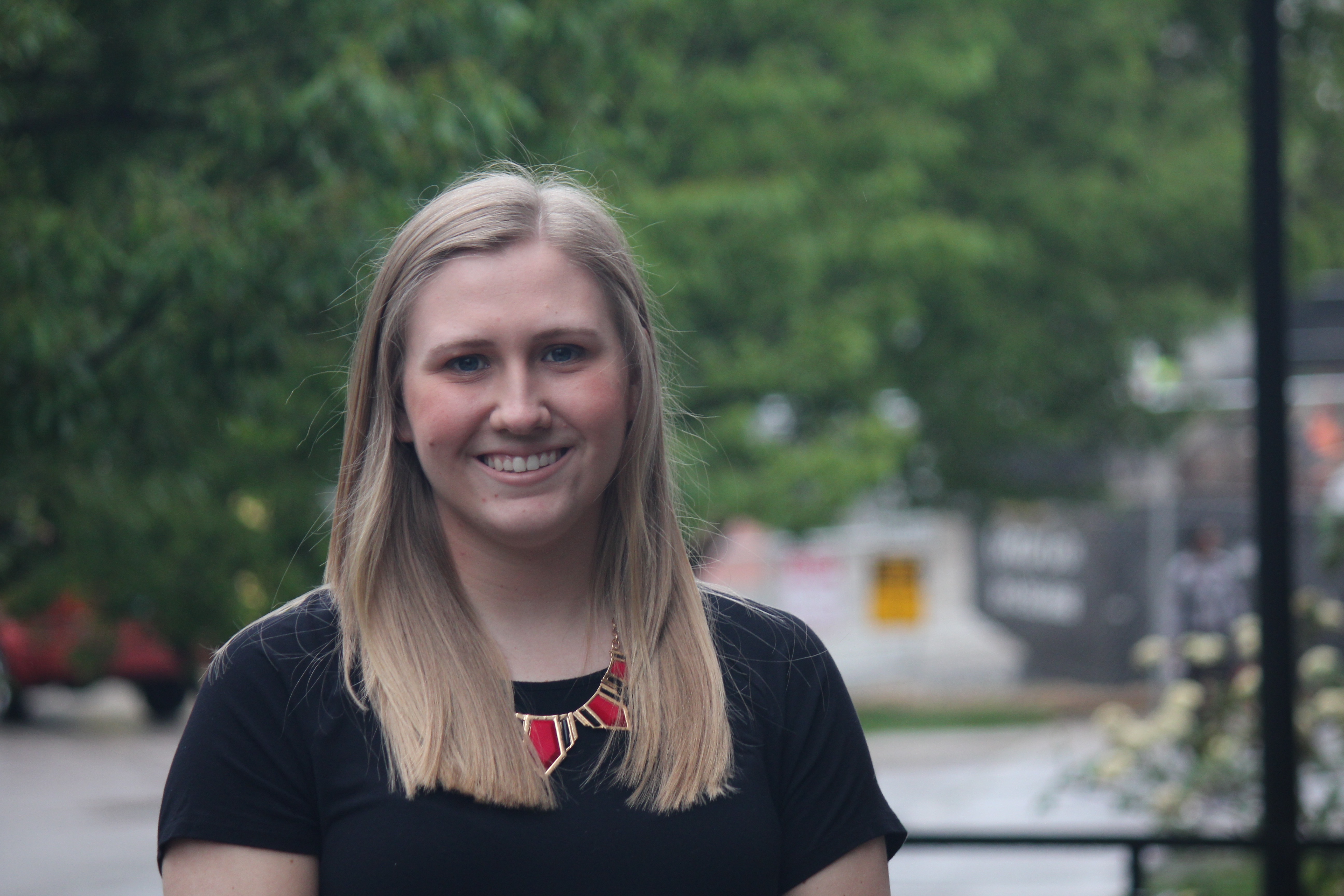 There are pivotal or defining moments that can shape a person’s life, such as graduating from high school, leaving home for college, landing your first job, buying your first home, or dealing with the death of a loved one.

Rachel Roarx’s pivotal moment occurred on May 1, 2012, at age 15, when she came home and found out that her cousin had been killed as a result of domestic violence. “My cousin had taken all of the correct legal measures to ensure her safety but they were not enough,” said Roarx. It was this pivotal moment that led Roarx to want to become a legislator to work to create laws to keep victims safe and end domestic violence.

Roarx, a native of Louisville, KY, graduated from Holy Cross High School, and attends the University of Louisville where she is now a junior and majors in political science with a track in law and public policy. Roarx is a remarkable college student with a 3.398 cumulative GPA. Upon graduating from high school, Roarx realized she did not have enough scholarship money to pay for college; as a result, she applied for employment at UPS to take advantage of paid tuition benefits through the Metropolitan College program.

If you’ve ever had to work third shift, you know it can be challenging –especially for individuals who work third shift while attending college. Metropolitan College students can ensure their success in the program and maintain a high GPA by following the Metropolitan College Student Success Tips. Roarx stated, “Adapting to night shift was the hardest part, not mentally, but physically. My eating schedule and routine had to change a lot.”

When it comes to advice for new and current Metropolitan College students, Roarx had this to say:

“… [schedule] your classes after 12 PM, get sleep, drink lots of water instead of coffee, don't feel bad when you tell people that you can't do something because of your work schedule, and be honest with your professors when you are having trouble. No one ever said night shift was easy.”

Roarx works part-time as an administrative assistant at UPS. Her day-to-day responsibilities involve making sure shipments are recorded correctly in the computer system and on-time for their flights. She trains new employees and communicates regularly with union employees, management, and load planners to solve problems that could potentially cause load delays. “I truly love my job at UPS!” said Roarx. “I get to problem solve. There are occasional bursts of adrenaline when a problem needs to be resolved quickly. I find this both exciting and rewarding.” Roarx went on to share how much she loves her co-workers and supervisors at UPS. “They are humorous and they keep me wanting to come to work every night. We have a great relationship,” said Roarx.

Working the night shift has not hindered Roarx from making a positive impact in the community and getting involved on campus. She has managed to stay extremely organized when scheduling activities or committing to long-term activities. In fact, her profound commitment to become a legislator has led to various pursuits of career-related experiential learning opportunities. At age 19, she became the youngest board of directors member for Louisville Girls Leadership, a non-profit organization that aims to help high school girls to become leaders within their community. She has served on the Student Government Association at the University of Louisville for the past two years and is a proud member of the Political Science Honor Society Pi Sigma Alpha. In 2015, during her freshman year at the University of Louisville, she was elected president of the Freshmen Arts and Sciences Student Council. In 2016, during her sophomore year, she filled a vacancy for vice-president of the Arts and Sciences Student Council.

“Losing teaches you even more than winning.”

In 2017, during her junior year, Roarx ran for president of the Arts and Sciences Student Council in the general election, but lost. Roarx emphasized, “Losing teaches you even more than winning.”

In previous years, Roarx traveled to Washington D.C. with Inspire U.S. to advocate for college affordability and youth voice in government. Because of her exemplary work with Inspire Kentucky, she was named a Commonwealth Ambassador by Secretary of State Alison Lundergan Grimes in 2015. In March 2015 and March 2017, she was also afforded the opportunity to attend the Metropolitan Women's Political Caucus' campaign school.

Congratulations to Rachel Roarx on being the recipient of the Spring 2017 Outstanding MC Student Award. 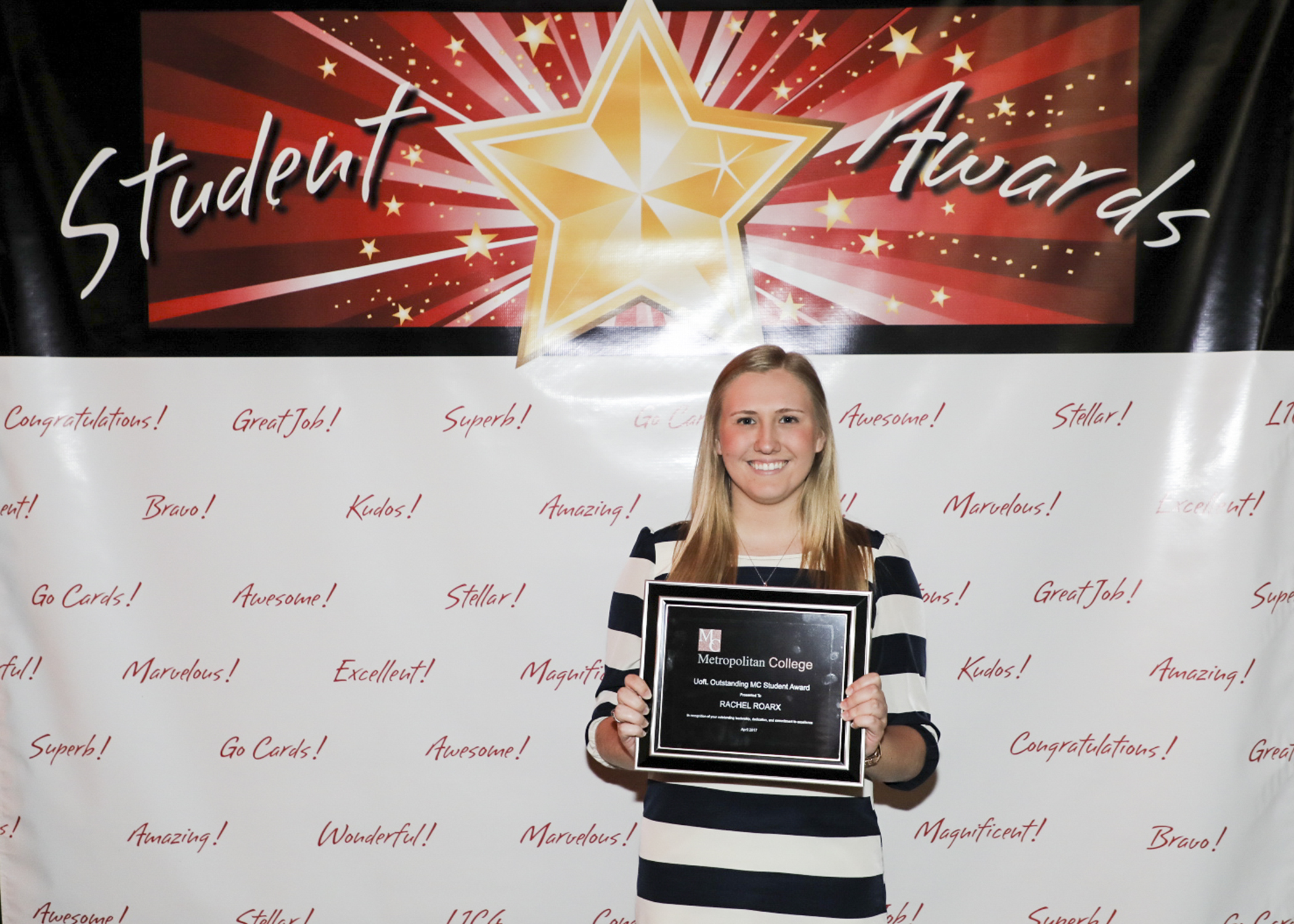 It is because of Roarx’s outstanding leadership and commitment to excellence that she was awarded the Spring 2017 Outstanding UofL Metropolitan College Student Award. She was recognized at the University of Louisville’s annual awards and recognition ceremony on Tuesday, April 17, 2017 at 7 p.m. in the Student Activities Center Multipurpose Room.

Roarx acknowledged that her success would not be possible without UPS. “Thanks to UPS, I am able to afford college and follow my dreams without having to worry about how I will pay for my bills after I graduate. I owe the program many thanks for giving my future a solid financial start!” In addition to paid tuition benefits, all Metropolitan College students receive comprehensive career development services. Roarx credits Metropolitan College Student Development Counselors for helping her to create a customized resume for her career field. “The resume meeting was extremely helpful and I get compliments all the time about how well laid out and content based it is.”

“Thanks to UPS, I am able to afford college and follow my dreams without having to worry about how I will pay for my bills after I graduate.

In hindsight, Roarx has accepted the fact that she will never understand why her cousin was killed. She thinks about her cousin every day and each day she aspires to be the best person she can possibly be because life experiences has taught her that life is short.

​Roarx will graduate with her bachelor’s degree in May 2019.

Roarx will graduate with her bachelor’s degree in May 2019. After graduation, Roarx hopes to run for public office and apply for a full-time position at UPS in the Human Resources Department. She will continue to volunteer and advocate for causes she is passionate about such as domestic violence prevention, human trafficking prevention, election improvements, equal pay, paid family leave, and access to affordable childcare.